Scaptodrosophila hibisci has been found in Australia and Papua New Guinea. In Australia, D. hibisci has been reported on 11 Hibiscus species in the Northern Territory. The distribution of S. hibisci is broader than that of S. aclinata, but for both species, local population sizes may vary by orders of magnitude, as the breeding habitat at a locality varies from just one or two to hundreds of plants.

With its widespread distribution in eastern Australia, and utilization of a number of Hibiscus species as breeding sites, S. hibisci can be reared in the laboratory on cultured plants. It has been used as a model in a few ecological and evolutionary studies related to population genetics, quantitative genetic analyses and reproductive biology. 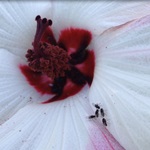 Published by the Hoffmann Lab, The University of Melbourne, 2015
https://adeer.esrc.info/biogs/DR00389b.htm

The Australian Drosophila Ecology & Evolution Resource uses the Online Heritage Resource Manager, a tool developed by the eScholarship Research Centre, part of the University Library at the University of Melbourne.